With the delayed Euro 2020 tournament starting this Friday, we took the opportunity to create our ultimate car football squad. Ignoring all UEFA rules, nationalities and Geographical restrictions, of course.

Just like Spain, we don't think we need 26 players, so we've selected the 20 cars that we think could bring the trophy home. We've also included comparisons to real-life Euro 2020 players for our starting 11. We're sure those players will be flattered by the comparisons...

Many wrote off our number 1 for being too small but the Fiesta makes up for it with plenty of heart and bravery. In fact, its only weakness is dealing with crosses and corners - but that's okay because we have some powerful centre-halves in the team.

It's a solid shot-stopper that is also pretty technical and has a decent passing range. Watch out for some Ederson-style deliveries to get our forwards running. It could even chip in with an assist as well...

Not the fastest full-back around but the Corolla will run and run and run. It's an experienced old pro who's been a fan favourite for years and is trusted to deliver on the big stage for both club and country. Expect it to challenge for Team of the Tournament and chip in with a few assists along the way.

Our ball-playing centre half. With plenty of natural flair, the Stelvio loves to show off but always looks totally comfortable on the ball. A strong, dependable defender that gives its all towards preserving clean sheets while looking classy and composed. Oh, and it can also ping a jaw-dropping 55-yard pass when needed.

The ultimate tough-tackling defender. The XC-90 plays very much in the same style as Nemanja Vidic. It leads the back 5 like a general, is our captain and our target man for set pieces. Its motto is 'see ball, win ball' - so it's likely to serve a suspension at some point during the tournament. Probably after the second match.

The MX-5 is the second hardest worker on the pitch. It will cover an insane amount of distance up and down our left flank during the tournament. Its super nimble feet make it an expert at shutting down opposition wingers and ensure nothing gets past this defender. It isn't the faster player on the pitch, but is probably the fittest and is definitely one of the smartest.

The Renegade is the big, ugly, experienced pro who takes no prisoners and guards the defence with its life. Loves a crunching tackle and a physical duel. If Vinnie Jones was a vehicle, he'd be a Renegade. So it's also likely to serve a suspension during the tournament.

The heartbeat of our car football team. The Golf quite effortlessly runs the show and holds the key to a successful tournament. Never gets the plaudits it deserves for its consistent performances, but everyone knows we'd fall apart without it. Super fit and super reliable, so it will play every minute.

Ever wondered what cars footballers drive? Take our quiz and see how many you can get right!

The M3 makes the magic happen. Our midfield maestro has the freedom to roam the pitch and sniff out opportunities to influence the game with some outrageous skills. Bit of a show-boat so will be a source of frustration at times - but the car that can spark a nervy semi-final into life. Also very likely to end up on an end-of-tournament highlight reel for a Gazza-esque solo goal.

Highly talented and intelligent technician. The GTR is not the quickest winger around (or even in our car football team) but it makes up for it with plenty of creativity, vision and ball control. It always sees and finds the right ball to unlock the defence which makes it a serious contender to lead the assist charts.

With so much pace and creativity out wide and in midfield, we needed a big, strong striker to act as a target man. The Range Rover Sport was the perfect choice.

It's big, it's composed, it's tough to shake off the ball and, unsurprisingly, very good in the air. Will bully defenders and bury crosses all tournament long. Golden Boot contender - especially as it's yet to miss a penalty in its career as well.

How on Earth will opposition defenders deal with one of the fastest vehicles on the planet? Repeated fouling, of course!

Yes, the Venom is the world-class superstar in our car football team. It's got tonnes of pace but, most importantly, an end product as well. Has a frustrating tendency to go missing during games but a true crowd-pleaser who will always burst into life when we need it. On its day, the Venom can win games on its own. Let's hope that's during the tournament final... 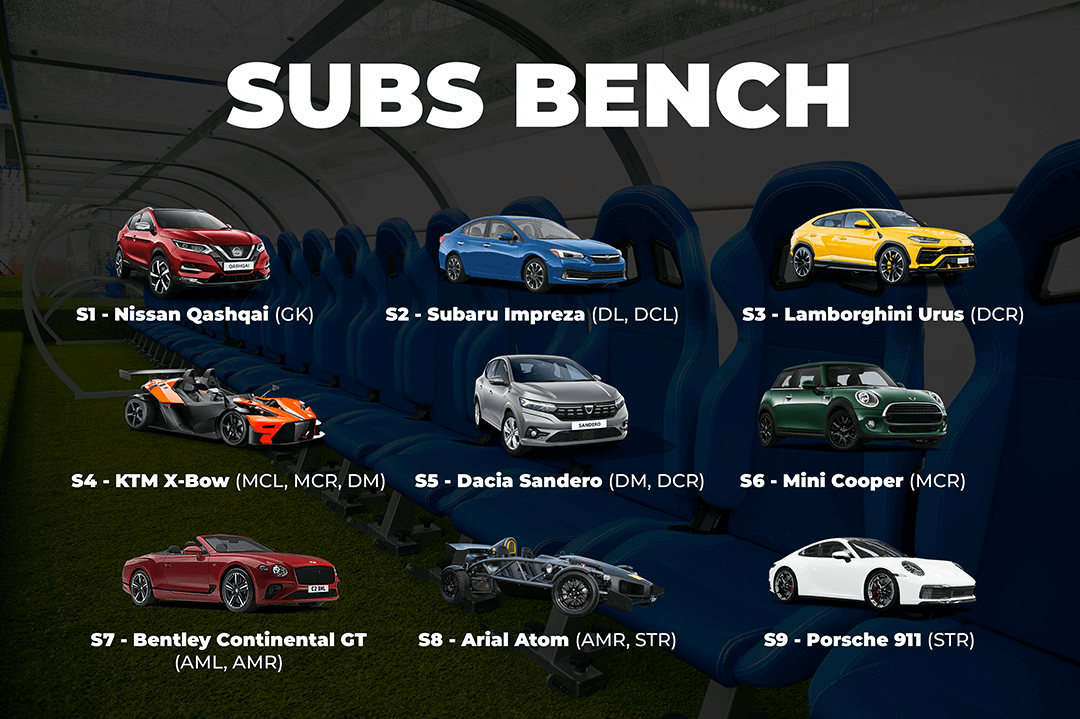 Commanding 'keeper who marshalls the troops well. Been our number 1 for many years before finding itself usurped by the young gun. Great in the air and at 1-on-1's but questions about mobility and agility. Unlikely to ever make an appearance despite being a quality 'keeper - unless one of our knockout matches goes to a penalty shootout. Then we're pulling a 'Tim Krul'.

The Impreza is always up for a scrap. It's a very physical defender who offers great cover across the back 4. Bites into a tackle and is always a very potent attacking force on the left flank. Not so focussed on defending when played as a left-back though which is why it finds itself on the bench.

Every squad has a last-minute bolter, and this is ours. The Urus is still a bit rough, hence the sub role, but it brings a different element to the defence. Don't be surprised to see us use it alongside the Stelvio to control games. Once scored an outrageous scorpion kick from a corner, so could do something outrageous during the tournament.

Look up 'baller' in the dictionary and you'll see a photo of the X-Bow (probably). It's got all the tricks, can use both feet effortlessly and always finds its way out of a tricky defensive press. Guaranteed to start at least one game but will mainly be used as our 'super sub'. Can also play as an attacking midfielder if we're chasing the game.

The plucky little Sandero can play basically anywhere on the pitch. We could stick it upfront, let it roam the midfield or even put it in goal (if everything goes completely wrong) and it wouldn't complain one bit. It's most at home shielding the back four or as part of the defence though. In terms of playing style, think Park Ji-Sung. Our ever-reliable performer and man-marks like glue. Criminally underrated but a quality player. Never scored a goal in its career - so imagine the scenes if it bundles in a 90th-minute winner...

The ultimate box-to-box midfielder that gives us the freedom to play without a DM. Will always give 110% and cover every blade of grass. Never stops running whether it plays 9 minutes or 90 and doesn't stop smiling while it does so. Absolutely loves the game. It's been an important part of our midfield for years and always steps up when we need it most.

Adept at crossing off either foot and loves to bully a defender off the ball. Stick it on corner duty whenever it's on the park to guarantee set-piece goals. Credits most of its dead ball skill to James Ward-Prowse and the England 2018 World Cup team. Not only that, but it's also a proper classy footballer, both on and off the pitch who hardly ever gets booked.

Another true speedster and the Ace in our car football team. We'll give it 20 minutes every game to terrorise tired defenders and let it head home with 2 goals and an assist. Tidy that.

A very unselfish player that definitely deserves more game time but always accepts its role like a pro.

The most selfish footballer you'll ever meet. A proper poacher who scores 15 goals a season and steals 6 or 7 more. Loves a through ball to show its pace and totally controlled and composed when 1-on-1. Will score all its goals from back-post tap-ins and you can bet your house that it won't pass the ball if it can shoot instead. Good thing it scores more often than not...

Drew is Head Content Writer for BookMyGarage. He has spent his career working closely with ex-mechanics and industry experts to provide in-depth but easy to understand car maintenance guides. His work has been featured in Daily Mail, Confused.com & Auto Express articles, among others.

Up-to-date motoring news, guides and information. With a variety of categories including news and motoring, we’ll help you out with driving safely, caring for your car and preparing for your MOT test.